Froebel recognized that a ball is often a first or favorite toy of infants. It is lightweight and easy to grasp or hold. For Froebel, the ball symbolized unity because it is a complete whole, a pure form. The whole is the beginning of understanding and everything else is derived from the whole.

Learning is derived from impressions formed during play. The child forms his/her first impressions of the physical world by holding, rolling or watching the ball. Play with objects and interaction with the mother or caregiver help the child begin to differentiate his/herself from the rest of the world (the whole). Talking (vocabulary) and eye contact are so important for these early impressions, and balls are a wonderful tool to stimulate interactions. 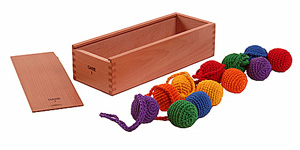 With the mother playing with the child in a cheerful but deliberate way, songs, rhymes and animated facial expressions all help convey fundamental ideas about the world to this new person. The play with balls introduces the idea of movement and motion into child’s world through rolling, swinging, and tossing games.

The balls help a child begin to distinguish form, color and movement — the qualities of matter in the physical universe. It also is early physical activity to improve of eye-hand coordination and gross motor control. While later Gift play is divided by Froebel into Forms of Life, Forms of Beauty and Forms of Knowledge, First Gift play is simply grouped into Form, Color and Movement.

FORM
A ball is round, with no sharp points or corners. There are no flat planes or lines. It is easy to hold. The ball has weight and it has size. The soft yarn is pliable and can be compressed slightly. It is soft and perhaps has a faint odor. In the beginning the child may simply recognize it has “being” or “not being.” Soon, it becomes “here” or “not here.” But the underlying impression is the complete qualities of what it is: a yarn ball.

Balls are an ancient toy and balls are all around us. There are many round objects in our world which this form can represent — fruit (the red ball is an apple, the orange ball is an orange), sports (baseball, basketball, soccer), marbles, balls of string, ballons, etc. The child will naturally compare the ball to other objects that are similar or “not ball.” It is imaginative play.

COLOR
The six colors can be divided into the primary colors (red/yellow/blue) and the secondary colors (orange/green/purple). As each ball is the same except for color, the child will begin to differentiate the balls by their unique quality — color. This is a wonderful way to introduce the colors of the rainbow to a young child. Froebel taught that red was often the color that most often attracted infants. You may select another color, but begin with just one ball. As each color ball is introduced, continue with the same games and songs. The name of the color is associated with the ball as the repeats the word during play.

Later, two balls may be used together. Froebel suggested that balls of complimentary color be used (red/green or orange/purple). If using three balls, start with the three primary colors (red/yellow/blue) and interchange them with the secondary colors. In this way, the child begins to associate the three colors as a group.

MOVEMENT
Matter can be in motion or at rest. It can rest on the floor or a table or on an open hand as is the hand moves. The ball has many possible motions (rolling, swinging, revolving, hopping, dancing, etc.). The adult can introduce new motions as the child becomes familiar with the others. The motions are usually introduced as part of a game or a story in which the ball is the main character. There are many such plays in the Froebel Gifts manuals, such as the Maria Kraus-Boelte’s Kindergarten Guide, but it can be just as rewarding to invent your own games appropriate for each child.