“It would prove a boon to our children and a blessing to coming generations if we could see that we possess a great oppressive load of extraneous, merely external information and culture; that we foolishly seek to increase from day to day.” 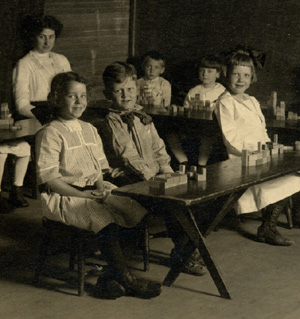 A Brief History of Kindergarten

Froebel began his educational institution in 1817 but did not arrive at the organized system we see today until approximately 1837. He had worked in the Swiss school of Johann Henrich Pestalozzi and conferred with other educational thinkers of his time. Over the course of 35 years, until his death in 1852, Froebel devoted his life to educating children and developing the methods to maximize human potential.

Philosophical Foundations
Froebel was greatly influenced by the work of German Romantic philosophers Rousseau and Fichte, as well as ancient Greek thinkers, and had been exposed to Taoist and Buddhist teachings. Although the son of a Lutheran minister and a devout Christian, he frequently ran into resistance from the church and other authorities for his radical thinking. He rejected the notion of original sin while educating girls and boys (and rich/poor) as one group, a controversial practice in 19th century Germany. Froebel lived a devout life but did not preach or evangelize. He avoided the use of scripture in his schools but encouraged children to observe their world … to recognize and respect the orderly and endless creation we all live within. A naturalist, philosopher and researcher (Froebel helped develop the budding science of crystallography), he approached the universe scientifically and developed his materials to demonstrate the geometry and patterns of the physical world.

Influence on Early Childhood Education
Froebel’s method inspired and informed the work of Maria Montessori, Rudolf Steiner and others, who adopted his ideas and adapted his materials according to their own work. Prior to Friedrich Froebel very young children were not educated. Froebel was the first to recognize that significant brain development occurs between birth and age 3. His method combines an awareness of human physiology and the recognition that we, at our essence, are creative beings. Once early childhood education became widely adopted, it was the natural starting point for innovations that followed. Montessori and Steiner both acknowledged their debt to Froebel, but the influence of the Kindergarten informs Reggio Emilia, Vygotsky and later approaches.

The Role of Women in the Kindergarten
Because he recognized that education begins in infancy, Froebel saw mothers as the ideal first teachers of humanity. Women, he believed, were best-suited to nurture children and became the Kindergartners (teachers) for his schools. As such, the Froebel Kindergarten offered the first significant careers for women outside the home. At that time, women were not expected (or often allowed) to work professionally. The Kindergarten attracted ambitious, intelligent women, who received advanced educations and developed businesses of their own. The more famous women who advanced Froebel’s cause include Helen Keller, Kate Douglas Wiggin, Elizabeth Peabody, Phoebe Hearst, Mrs. Leland Stanford, Mrs. Grover Cleveland, Elizabeth Harrison. However, Froebel also believed that men, especially fathers, were a fundamental part of a child’s education. For Froebel, education was a family activity, hence his famous quote; “Come, let us live for our children.”

Influence on Modern Art and Design
Frank Lloyd Wright, Buckminster Fuller, and many other notable architects and artists were educated with the Froebel™ Gifts. Wright’s connection to the Gifts is well-documented and he was a lifelong champion of the method, even constructing a Kindergarten for his own children (and others in the neighborhood). Buckminster Fuller developed his geodesic dome as a child in the Kindergarten. More than an opportunity for creativity, the Kindergarten provided Wright and Fuller a foundational philosophy for design, shaping their views of nature, pattern, and unity.

The Bauhaus artists used Gifts & Occupations, creating the new language of modern art. Paul Klee, Vassily Kandinsky, Piet Mondrian, and others were either educated in the Kindergarten as children or were trained Froebel™ Kindergarten teachers. They utilized these materials and adapted the philosophy into their Bauhaus design school. Even today children of the Kindergarten receive a university-level 2D/3D design curriculum, learning a sophisticated visual language even before they develop their verbal skills.

Influence on the Toy and School Supply Markets
Milton Bradley was the first major toymaker to produce the Gifts & Occupation materials in the United States. Not only did this lead to the rapid expansion of the school supply market but affected the design of toys in general. In the decades that following the spread of the Kindergarten, toys were marketed for their educational content and displayed more potential for creative expression. Tinkertoys, Unit Blocks, Cuisenaire® Rods, Color Cubes, and many others are direct off-shoots from Kindergarten toys. F.A. Richter (a contemporary of Froebel) produced faux stone versions of the Froebel™ blocks in his Rudolstadt Anker-Steinbaukasten factory. These stone sets were a favorite toy of Albert Einstein.

Learn more about Froebel Kindergarten from the upcoming documentary series on the history of Kindergarten.