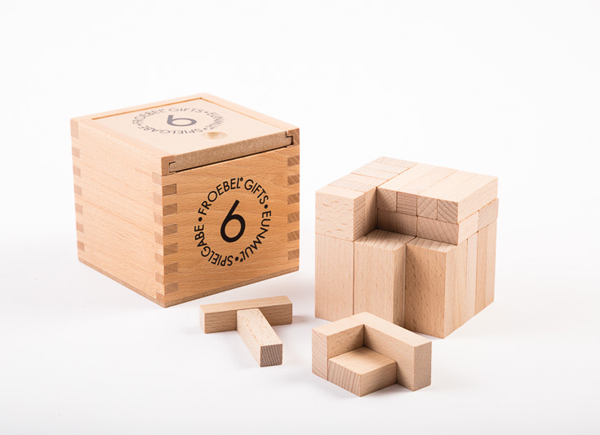 “From objects to pictures, from pictures to symbols, from symbols to ideas, leads the ladder of knowledge.”

The Froebel Gifts are perhaps the world’s first educational toys … they certainly were the first materials designed for child development, as Kindergarten was the original preschool method. Developed in the early 1800’s by Friedrich Froebel, inventor of Kindergarten, the Gifts appear deceptively simple but represent a sophisticated approach to child development. Over the last 180 years these intricately conceived playthings had a widespread impact, becoming interwoven with the history of art/design, education and popular culture.

Much has been written about the Gifts since Froebel’s death in 1852, but a lack of published material and modern translations has increasingly led to a misunderstanding of the meaning and purpose of these materials. As a result, the awareness of Froebel’s method declined sharply in the 20th century. This site is intended to demystify the materials and more fully explain their intended use. Want to learn more? Subscribe to the Path to Learning podcast, or visit the Garden of Children documentary series website.

To understand of Froebel’s original concept of his Gifts (how they are intended to be used) we must look at the history of the Kindergarten, the Froebel philosophy, and the specific attributes of the Froebel Gifts. This site is intended as an introduction and more information can be found through other resources and among the Froebel community. Learn more about annual conferences on the Froebel method.